11 antivirus to protect your Android smartphone

Android OS is struggling, version after version, to be an secure operating system, with the aim of avoiding annoying its users and protect their personal data from malicious attacks. Only one type of application that can help to protect us is antivirus app, of which there is a large amount on Google Play. 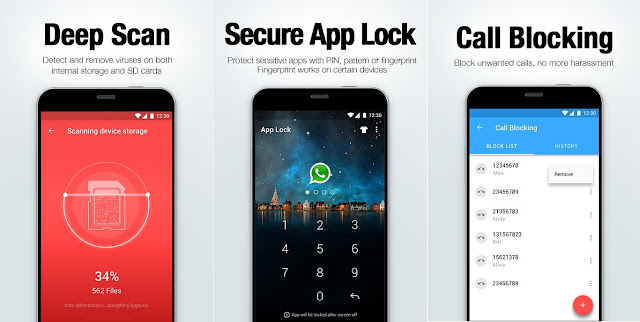 Obviously, there is no better anti-virus in common sense. Sometimes you want to have these types of apps not only for their ability to protect against malware but also it has some extra function that helps to make your device more secure. Here is a list of 11 of the best Android antivirus that will keep your mobile phone a bit more protected.

You may also interested to read: How to hide root on Android Device to pass Google Play security controls.

It is possible that more than one has or had installed on their computer the well-known antivirus Avast !, but not conforming to the sector of the PCs, have moved to the mobile, where they also take a few years. An increasingly solid OS, despite being mostly attacked, has greatly diminished the popularity of this kind of antivirus. Thus, they have had to add different functions.

In the case of Avast! Has an anti-theft that allows blocking the device, as well as take photos and capture sound of the thief. It also has an application blocker option that, when configured, ask a PIN code to access it, perfect to prevent anyone from entering your private applications without your permission.

Here we have another familiar computer antivirus that has come to Android platform to offer its protection to our beloved phones. Like all applications listed here, AVG mobile antivirus also introduces additional features that will turn your smartphone more protected, in case it falls into the wrong hands.

AVG Antivirus Free has similar feature like Avast antivirus, to block applications using a PIN code. Thus, nobody apart from you can open them without your permission. Another function is to locate your device with the help of Google Maps, helpful to find your lost or stolen beloved phone. It allows you to hide private photos in an encrypted store so that nobody can gossip without knowing you. Additionally, It can also protect your Wi-Fi network by scanning it for weak encryption problems or passwords so that no one is clogged.

Again we find another famous antivirus in the world of computers to protect our phone from malicious attack and to prevent thieves from accessing our data. As usual in this type of apps, one of its additional functions is the location of our device if, at some point, we do not know where it is.

Other additional function that we can find in Kaspersky is the blocking of unwanted calls and SMS or suspicious links to avoid phishing. What differentiates this app from other antivirus apps, is that you can control it with Android Wear to find, for example, your phone or to search for malware.

McAfee Mobile Security is another veteran, not only on computers but also on Android smartphones, where it has grown in efficiency and additional features. All of them focus on the assumption that your phone has disappeared or been stolen, plus, like Kaspersky, it is compatible with your Android Wear.

For example, through the McAfee website, you can capture the person who has your phone and sends you the location of the phone or, before the device's battery runs out, save the last place. Of course, you can also make a backup and a complete deletion of your device and protect it so that the thief can not uninstall the app.

This is the first application that does not have a history of computer protection behind, although, as they say in the description, Hi Security (the developers of the app) is supported by McAfee. This time, in Virus Cleaner we do not find the typical option to find the device if it is lost or stolen.

Virus Cleaner has the most important options to protect applications with PIN code, pattern or fingerprint so that no one else can execute them without your permission.

We also find functions like blocking unwanted calls and a history cleaner so that potential attackers do not know where you've been browsing.

360 Security is an antivirus that, besides being used to protect your device from malware, and like the other apps in this list, has several functions. In this case, we see some of the dubious utility as an "accelerator" of the phone, but also has the typical functions that do serve something.

We recover the phone locator in case of loss or theft that you can activate from your web and that, in addition, can erase, alert or block it so that no one takes hold of it. It also consists of apps blocker functions, an application manager, and an unwanted call and SMS blocker.

Here is another of the old acquaintances in the world of antivirus for computers that have gotten deeply into smartphones with his proposal. They presume, on this occasion, to have been awarded numerous times, but in this case, we are before a trial version and, if you want to enjoy all their functions permanently, you must subscribe to the premium version.

In addition to antimalware features, it has some as a phone pager via SMS (if the version of Android is 4.3 or lower), a phone blocker in case of theft or the ability to take a picture of the thief. The trial version lasts a total of 30 days, after which you can purchase the premium version or stay with the free, whose functions are limited to those of antivirus and phone finder by SMS.

Avira Antivirus is one of the applications able not only to analyze the storage of your phone but also the microSD card that you have put in that moment in search of malware. This app also protects your identity trying to prevent the manipulation of your email address or that of your contacts, even warning if it happens.

In addition to this, it has the typical device locator in case you are lost to be able to find it thanks to a sound alert if you have it at home, but you do not know where. Through its website, you can also manage everything that has to do with the security of your device, including deleting or blocking it.

We finished this list with Panda's Android antivirus, which we have also known on our computers. Like Avira, it also scans your microSD card for malware in addition to internal storage. This app can also be downloaded for Android Wear to be able to use some of its features.

Some of its main functions are the typical and useful anti-theft device to locate, clean or remotely lock your phone in case of loss or theft. If you upgrade to the premium version, the phone can also take pictures of the thief that will be sent to your email, an application blocker, and even a movement alert in case someone picks up your phone without your permission.

ESET is the application of the same ones that developed the Nod32. This application has had the honor, in 2015, of detecting 100% of the malware that has reached the devices. ESET Mobile Security & Antivirus has a 30-day trial version, where you can enjoy premium features such as call and SMS blocking, photos of thieves using the rear and front camera or sending the last location just before The battery runs out.

If you choose to keep the free version, you can still keep some functions like support or anti-theft that will allow you to block, delete and remotely locate your device.

Cheetah Mobile also has its own antivirus, although the list of devices that support some of its additional features is somewhat limited. For example, we have the case of its Block Apps feature, which is only compatible with devices running Android versions between 5.0 and 6.0.

This feature not only allows you to block apps with the PIN code, but you can also use the fingerprint if you have a Samsung device or an HTC One A9, as described. This feature allows you to protect your apps and make photos to the intruder that tries to unlock your applications after failing three times. It also has, as usual, a locator of your phone and a blocker of calls and SMS unwanted.


In TopAndroidStuff | Is it really necessary to install anantivirus on Android?

How To Protect Your Android Phone From Steal

How to choose the best microSD card for your Android Phone

June 17, 2017
Want to buy MicroSD card? Read detail review to buy best microSD card suits your Android Phone.
With the passage of time Android device users (regardless of whether we talk about mobile or tablets) we become more demanding with both specifications and storage. A fairly common and well-seen solution is the inclusion of a microSD card slot that, by the way, makes life easier for many people.

Now, some people have doubts about which microSD cards to buy, as there are usually several features that the user can not differentiate and which one is the most suitable for the use he wants to give. With this in mind, for those who are confused and undecided, we will explain how you can choose the microSD card that best suits your use.

You may also be interested to read: How To Transfer File To Android Using Free File Sharing Apps (QieZi Folder).

A review of the different types of microSD cards

First of all, it is best to start by knowing the different types of microSD cards and their writing sp…
Post a Comment
Read and Comment »

Is it really necessary to install an antivirus on Android?

June 17, 2017
Using antivirus on Android phone really helps or not.
A couple of weeks ago I explained why you should not install RAM and battery optimizer on an Android smartphone. In some of the comments you posted also mentioned antivirus as a problem for the performance of the device, but is it really necessary to install an antivirus on Android?
In this article, I am going to explain the reasons why it is not advisable to do it, although the companies behind these products do not stop to perjurers that are something obligatory (logical if you commercialize it). And is that, despite the bad reputation that was created in its beginnings, Android is one of the safest operating systems today.
You may also interested to read: Top 11 antivirus apps for android devices.

Statistics say Android is secure
But does malware or phishing affect you equally? Yes, Android is no exception and is at risk of being infected, but the probability is really low. And the more up-to-date the mobile phone or tablet is.
…
Post a Comment
Read and Comment »

May 13, 2014
Share files with your friends for free at lightening speed with Free File Sharing Apps for Android.
Here you will learn how to send and share your android big files, app, games, theme, picture, songs, videos etc to another android device in QieZi folder at a fast rate using ShareIt app. You will be able transfer any files from your android phone within seconds with your customized WiFi connection. So, let’s get start.
A number of file sharing apps are available in the android market introducing new features. Among them ShareIt one of the best and highly rated free app for file transferring between android devices. Not only android smartphones, tablets but also it supports  iPad, iPhone and even windows PC.